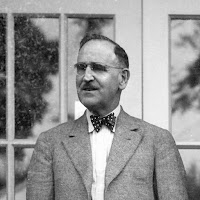 Dr. H.E. Anthony was one of Moravia’s most memorable characters, having practiced as a “country doctor” for 60 years, beginning his career in horse and buggy days and finally hanging up his shingle about the time astronauts were first launched into space. He was hyperactive in outside interests, lending his hand to many organizations in town. He is also remembered as both a prolific amateur painter and playwright. During a span of over 30 years, one of his comedic plays was staged in Moravia nearly every year, each for the benefit of a non-profit organization.

Harrison Eugene Anthony was born on December 3, 1878 in Groton, N.Y. “Harry” was the fourth and youngest child of Alonzo and Mary Anthony. Alonzo was a skilled machinist who worked in the Groton Road Roller Works factory. Mary died in 1881 when Harry was just two years old. A year later, Alonzo married Susan Bower, who helped raise young Harry as though he were her own child.
Harry attended Groton High School, graduating in 1895 at the age of sixteen. He taught school in Lansing for two years before enrolling in the Medical Department at Syracuse University. After two years he transferred to the University of Maryland Medical School at Baltimore where he graduated in 1901 and was admitted to practice as a physician. To earn money to help pay for his education, Harry spent summers working ten hours a day at fourteen cents an hour at the Groton Bridge Company.

After returning from Baltimore, Harry first practiced medicine in the tiny hamlet of Locke, N.Y. Here he enjoyed the life of a country doctor, and the small community appreciated his services despite his relative inexperience. One his favorite stories, was about a woman, intent on making a match between the young bachelor doctor and her sixty-year-old spinster daughter. Nearly every week the woman would summon the doctor to attend to various maladies afflicting her daughter’s elderly pet horse, Toppy, despite Harry’s protests that he was a medical doctor, not a veterinarian. After each visit the mother would pay for his services with a rolled up bill, usually either a $10 or $20, which was much more than his usual seventy-five cents for a house call. Harry somehow deflected any romance with the daughter and the arrangement ended after Toppy’s health declined to the point that the mother asked Dr. Anthony to help the horse “tide gently over to equine heaven.”

After four years in Locke, Harry wasn’t making much progress in paying off nearly $2,000 in education loans.  Reluctantly he accepted a position as a staff physician at Dr. Given’s Sanitarium, a 400-bed hospital in Stamford, Connecticut, knowing that he could not only pay off his debt, but would gain valuable experience. While at Stamford, Harry met Dr. Martha Annie Howe, a native of Marlboro, Massachusetts, as well as a fellow staff physician, whom he married in 1906. The newlyweds moved to Moravia, establishing a practice in a house on the site of the present Moravia Post Office parking lot.  The house had been occupied by a succession of notable Moravia physicians dating back to the early nineteenth century including Hilam Bennett, Cyrus Powers and William T. Cox.

After two years in Moravia, Dr. Anthony sold his house and returned to school, this time in New York City where he obtained an advanced degree in diseases of the eye. Afterwards he intended to establish a specialized eye practice in a larger city, but the citizens of Moravia intervened, convincing the couple that small town life would be more suitable for them. The doctors returned to Moravia, moving to the former Cuykendall house just east of St. Matthew’s Episcopal Church. A few years later, the elders of the church purchased the house from Dr. Anthony, to be used as their rectory. Dr. Anthony moved his practice and family to the south corner of Main and Congress streets where they lived for the next fifty years.

In his early days in Moravia, Dr. Anthony traveled to his patients by bicycle, with his collie, Don, by his side. Beyond the village, he traveled by horse and buggy throughout the area and at all hours, day and night. He bought his first automobile, a Mitchell, in 1911 at a time when only a handful of Moravia residents had ever ridden in one, let alone owned one. Dr. Anthony held a firm belief that house calls were an essential part of a good doctor-patient relationship and was critical of younger doctors who were reluctant to venture from their office.

Dr. Anthony settled into a very active life in Moravia where his practice grew and he took on responsibilities as the town’s health officer as well as examining physician for the county coroner. His medical career spanned two world wars, during which he provided his services on the home front in determining the fitness of young men and women for enlistment, in addition to maintaining his private practice. He lived through a period of dizzying advances in medical treatments and pharmaceuticals including the introduction of sulfa drugs, penicillin and polio vaccines. Dr. Anthony claimed that sterilization of milk was the single most important public health advancement during his lifetime, which contributed to a dramatic decline in cholera cases.

Beyond his practice, Harry was involved in nearly every religious, social and civic function in the Moravia. He was an active member of the Congregational Church and the Masonic order. Harry also was a member of the school board, serving as president for many years. In 1956, as he neared retirement, Dr. Anthony helped found the Moravia Rotary Club. He was also a lifelong baseball fan, fisherman and, as attested by his former patients, an avid fan of Royal Princess cigars.

Throughout his life, Harry dabbled in music, art and writing. His love of storytelling along with his sense of civic duty led to a steady stream of plays, staged for the benefit of local organizations. The overt tone of each play is a cornball comedy, with some underlying moral message. Harry drew from his own experience to tell stories that take place in small towns similar to Moravia, Groton, Locke or other smaller “corners” such as Dresserville, Montville, Kelloggsville and New Hope.

Dr. Anthony began moonlighting as the local playwright in 1921. He helped with a local production of a nationally distributed play called Zander vs. Gump, and made a few modifications to the script to add local flavor. The Gumps comic strip, from which the play and a series of silent short films were launched, was very popular at the time, primarily because it was one of the first to feature “ordinary people”.  While working on Gump, Dr. Anthony got the idea that he could write a play especially adapted for the talents of local people.

His first original script was Old Doc Spivens, produced in 1922 and starring many of the same cast that appeared in Zander vs. Gump. The play features zany characters who interact with the wise-cracking Doc Spivens. The role of the doctor was created expressly for the talents of popular rural mailman, Fred Whiting, but Fred became ill a few days before the scheduled performance and was replaced flawlessly by an aging Frank Covey. A review published in the Republican-Register praised Anthony’s work, “if this initial attempt is any indication of the abilities of its author, then we shall await very anxiously some future creation from the same pen.”

For the next thirty years, Moravians could count on Anthony’s pen to issue a script nearly every year. In the early days, Harry would direct the play himself, although he later called upon others such as Janet Kilborne [Hunter] or Katrina Peckham for the duty. Over the years he nurtured a core group of actors who appeared in several of his plays including Mabel Oakley [Woellmer], Fred Whiting, Millie Nye, Brand Flowers, Ed Harter, Ray and Alma Robinson, Albert “Putt” Morse, Ray Hargett and many others. Dr. Anthony also wasn’t afraid to take the stage himself. Incredibly, he also designed and painted many of the sets and wrote original poems for each advertiser in the plays’ programs.

Dr. Anthony was an ardent supporter of the Chautauqua Movement, which brought a weeklong series of lectures, plays and other entertainment to Moravia each year for many years during the early part of the twentieth century. During the Chautuaqua tour of 1928, he was introduced to Edna Means who was a partner in a publishing house in Chicago. Miss Means read several of Dr. Anthony’s plays and offered to purchase the rights to The Lady Doctor and Step On It. Her outfit subsequently made the plays available throughout the country. Various productions were staged over the years by church and school groups, which earned Dr. Anthony a small royalty for each performance.

Over 600 friends, colleagues and other well-wishers attended a testimonial reception given Dr. Anthony in 1957 for having served the community for over 50 years. Martha was honored as well for her services to the community. From an article about the event, “each and all of the speakers paid tribute to Dr. Anthony for his untiring, unselfish devotion to the community, not only as a civic leader, who gave freely of his time, ability and his purse; who once paid a debt of $6,000 for the Masonic Lodge; who still treats many patients without charge, and continues ever ready to lend a helping hand for the public good.”

Harry and Martha Anthony raised two sons, Warren, born in 1908, and Eugene, born in 1914. Warren died tragically at the age of 21 while on vacation with his parents in St. Cloud, Florida. He was a graduate of Moravia High School and was pursuing a teaching degree at Moravia at the time of his death.

Eugene was valedictorian of the Moravia High School class of 1931, attended Syracuse University where he earned his undergraduate degree, followed by a degree in medicine. He spent two years in residency at Manhattan Eye and Ear Hospital before setting up a practice in Fulton in 1941 as an ophthalmologist, where he remained until his retirement in 1989, excluding time spent serving the U.S. Army Medical Corps during WWII. Eugene and his wife Winifred were married 65 years prior to her death in 2002; Eugene died in 2006.  They were predeceased by a son, Hal, in 1989 and are survived by three daughters, Gail, Donna and Wendy, and several grandchildren.

Just three days after Dr. Martha Anthony’s death, their son, Dr. Eugene Anthony, was on hand to help dedicate the Anthony Gallery, which was established by Joan Washburn with support and encouragement by the Chamber of Commerce and the Anthony family. The Anthony Gallery served as an inspiration and outlet for local artists and artisans for four decades, prior to shutting its doors in October 2009. Starting in 2015, the COLHS annual art and photography show will be named for Dr. H.E. Anthony, with permission from his family, a tribute to one of our town’s most interesting and beloved figures.